"Don't think that you will go back as you came; those before you thought so. Yet they always left their minds behind in Bodrum..."

Cevat Şakir Kabaağaçlı, the fisherman of Halicarnassus, wrote these lines for Bodrum. No holiday resort in Turkey has an image as distinct as Bodrum. Everyone has a separate Bodrum of his/her own. Let us start with the Bodrum of the Fisherman of Halicarnassus, who made Bodrum famous nationwide and worldwide.
"In the past, houses used to be built on high slopes for war and defense purposes. These were called "towers", not houses. But with their longing for the sea and the blue, they could not stand in their place, scurried downhill in their pine-smelling pattens and lined up along the shiny pebbles of two coves. The rest stood up to their toes and stared at the sea over their sisters' shoulders. Some of the brave houses dived into the sea and became a boat and played on the waves in joy and mocked their diffident sisters on land. This is why the houses, boats and tangerine orchards are closely related. Tired of going back and forth at sea, boats become either a house or a tangerine orchard." 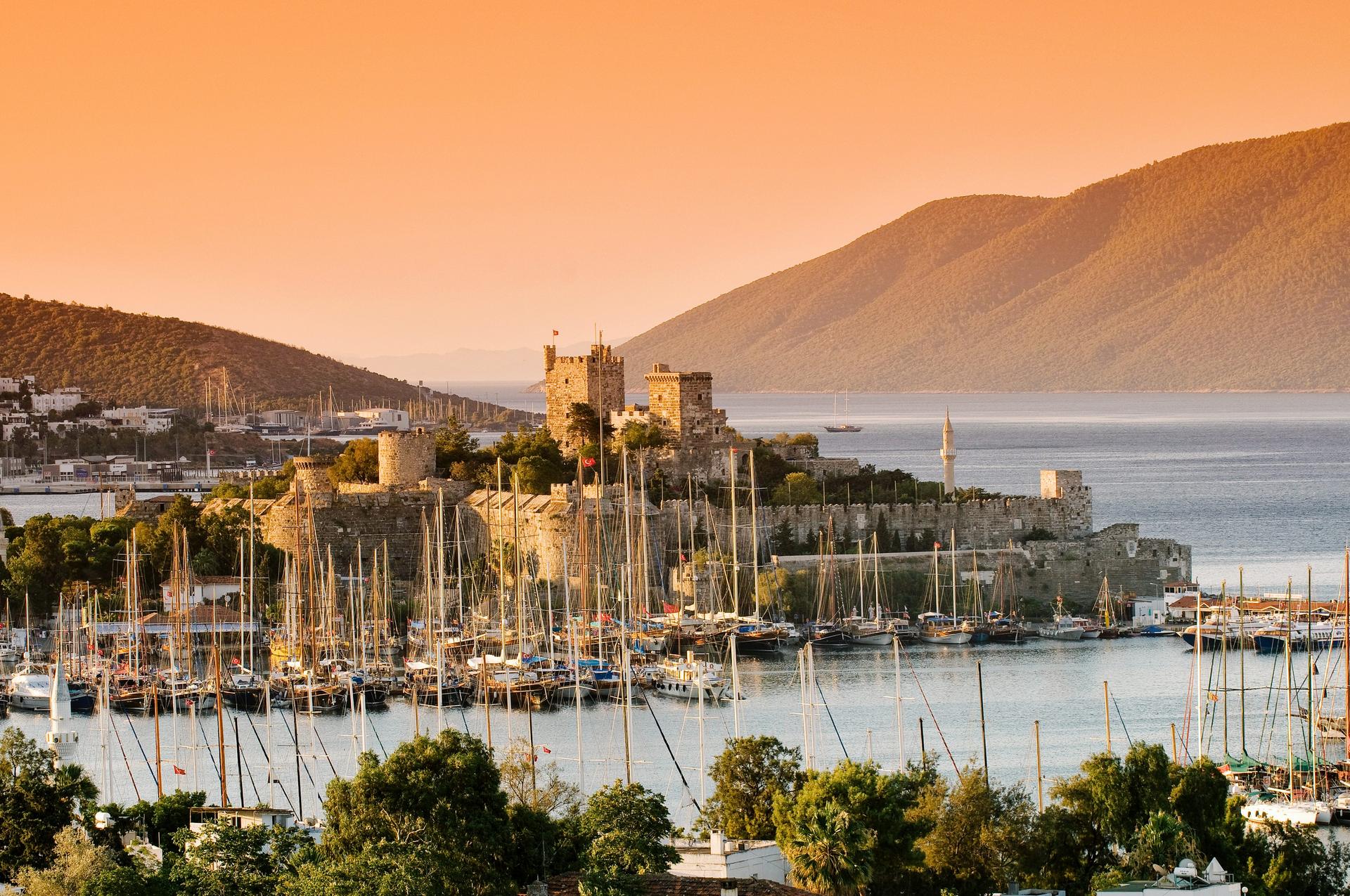 It may sound exaggerated to those who have not seen and experienced Bodrum, but what Cevat Şakir told us about it is exactly true.
Bodrum is one of the most mentioned holiday resorts in Turkey. The fisherman of Halicarnassus, who introduced Bodrum and the intellectuals in whose hearts he planted the love of Bodrum have a great share in this reputation by making Bodrum their abode and spending most or all of the year there. Selim İleri, Vedat Türkali and many other writers have novels and stories which take place in Bodrum. In Bodrum, whose fame grows and whose crowd grows as a result, you will surely come across a poet, writer or painter you know.
But of course, this is not the only reason for its reputation. Bodrum's hearty sponge-divers, captains in love with the sea, fishermen, whitewashed houses, purple flower bougainvilleas wrapped around the walls of the houses, sparkling bays around it, if not in it, and most of all, the nights that extend to sunrise; all contribute to the fame of Bodrum.
Bodrum is not a place only to rest. Holiday is definitely accompanied by entertainment. On holiday in Bodrum, a day is divided into two. In the daytime, you swim in the sea in an azure bay, the bodies are left to the burning heat of the bright sun. In other words, you rest to get prepared for the night. When the sun sets and the stars adorn the sky, the call for a new life is heard. It is not possible to ignore this call. This is the call of the Bodrum night. Who can resist the call of friendship, dreams, love? Especially if the full moon ornaments the sky!..
Restaurants are ready for the night along the coastline, in the surrounding villages and bays, on the streets where the whitewashed houses are lined, and on the slopes. The fish caught in the hooks and nets of skilled fishermen are laid on ice. Groupers, colorful skaros, stuffed mussels, calamars and definitely octopuses! Octopus salad is a must if the rakı table is set up in Bodrum. It is not known whether it is because of the octopus or the chefs who cook it, but it is so.
Everyone will find a place in Bodrum according to their own hearts to spend the evening. There is a fisherman's tavern and a pizzeria as well. There is tavern music and rock music at the same time. On Bar Street, Cumhuriyet Street, Neyzen Tevfik Street, Azmakbaşı, bars and pubs are all over the place. The choice is yours. 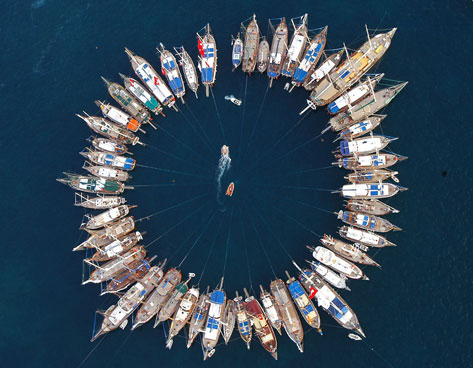 THE RICHNESS OF HISTORY IN BODRUM
Bodrum is not only sea, sun and colorful nights either. Mankind's adventure in Bodrum has a history of nearly 3000 years. The Historian Herodotus wrote that Bodrum was founded around 1000 BC on the site where the Castle is located by Doris. At that time, this place was an island.
Halicarnassus had its most brilliant years in the 4th century B.C. During the 24-year rule of Mausolos, who made this place the capital of Caria, the construction of Mausoleion, which is considered one of the Seven Wonders of the World and some parts of whose foundation have survived till today, was started. After his death, Artemisia II, who was both his sister and his wife, continued the construction of the mausoleum. When she died before she could complete it, the artists completed the mausoleum with their own means. A magnificent 42-meter high work of art which consisted of the Ionian-style temple section surrounded by 36 columns, a 24-step piramix on it and a carriage with a horse on the top, and marble statues of Mausolos and Artemisia came into being. The statues and some reliefs are in the British Museum today. They were not smuggled but taken away with the permission of the sultan.
When Artemisia died, Idrius took the power, followed by Princess Ada. Ada, who had been dethroned by his younger brother, was reinstated by Alexander the Great, who captured the island (334 B.C.). (We will re-visit Ada at Bodrum Castle section.)
After Alexander the Great, the region went under the rule of Lysimachos (301 B.C.), and later under the sovereignty of the Ptolemaios. In 189 B.C. it was connected to Rhodes, and to Pergamum Kingdom in 167 AD, and in the 4th century AD, it became the center of the Diocese of Caria. The Menteşe Principality was established in this region in 1274 and it was added to the Ottoman lands during the reign of Suleiman the Magnificent.
Since the old city is completely under the present settlement, not much could be brought to sunlight. Located on the hill next to the highway passing by Bodrum and restored, the theater was built during the Maussollos period. Some of the city walls can be seen at the Myndos Gate on the Gumbet road. The Castle, considered the symbol of the city, was built by Saint Jean Knights with the permission of Sultan Çelebi Mehmet. The construction of the Castle was begun in 1402, and some parts were added to it over time. The ruins of Mausolleion, which was destroyed by an earthquake, were used as building blocks in the Castle. The towers of the Castle are called French, Italian, German, Spanish and English Towers according to their construction styles. The Castle is used as a museum today. The first and only underwater museum of our country is here.

THE RICHNESS OF HISTORY IN BODRUM

In the hall where the findings of the shipwreck retrieved from Yassıada, which is an island off the coast of Bodrum Peninsula, are exhibited, it is possible to walk over a one-to-one model of the ship in question.Dated back to the 6th century AD, the ship was carrying wine in amphoras. During the excavations, food containers, food remains and sailing items were recovered from the locker of the ship. Since all the iron objects found on the ship had decayed under the influence of sea salt, the rubber qualities filled into these shells could be understood.

All the iron objects exhibited are actually rubber molds. The most interesting find of the ship is the scales with the swine-head handle on which Captain Yorgo's name is carved and the Athena goddess-shaped weight. The exhibition hall was originally used as a chapel during the Knights.It was built between 1402-1437.

The ship which sank crashing into the rocks in the small bay called Serçe Harbor near Marmaris is known as Glass Wreck due to its finds.The shipwreck, lying at 32 meters and excavated by Prof.Dr. George Bass between 1977-1979, has been recovered to a large extent. When the glass ingots the ship was carrying were examined, they were determined to be the goods of a merchant who was sailing freely between the ports of the Islamic and Byzantine states. They were collecting glass scraps while new production glasses were sold at the ports of call. Many finds such as weight dating back to early Islam period, a sword, strainer cups, and checker pieces come from this wreck. Through the diversity of finds, the wreck is dated back to the 11th century,or to be more precise, to around 1025.

In the hall behind the Italian tower of Bodrum Castle, the tomb of Princess Ada of Caria Hekatomnos dynasty and her personal belongings are exhibited. It was forensically determined that the skeleton from the grave found during the foundation excavation in Bodrum belonged to Princess Ada. Fleshing studies in England and in a portrait obtained in Priene the figure resembling the head of Ada in terms of etching and facial features, the jewelry with Persian influence, giving multiple births anthropologically, and a horse riding personality all point to the strong possibility of the skeleton belonging to Princess Ada. This noble woman died at the age of 44 and was put into the grave with her jewelry, a drinking cup and gold embroidered clothes. The skeleton of a mouse which entered the sarcophagus of the princess, who died in 30 BC, before the lid was placed was found with the bones of Ada. After the sarcophagus was closed, it was covered with large stone blocks.

The video footage of the recovery of the finds, the genealogy-chronology, the decor and furniture according to the meeting hall of the period, and the plaster copy of Ada's head taken from Priene to the British Museum can be seen in the Exhibition Hall of Prince Ada of Caria. There is a special entrance fee for this exhibition.